An Interview with Joanne Tompkins on "The Image of Theatre"

Come see us at ATHE

The Legend of the White Snake across Mediums

My contribution to the Theatre Journal special issue on "Theatre and the Nonhuman" examines three different layers of the nonhuman in performances related to the Chinese Legend of the White Snake (Baishe zhuan): the supernatural, the spectacular, and the technological. The White Snake is a well-known folktale about a snake spirit who transforms into a woman (Madame White, Bai niangzi, or Bai Suzhen) and her relationship with her human lover (Xu Xian or Xu Xuan).

This essay is part of my book-length project on spectacle and technological mediation in contemporary Sinophone theatre and performance, which examines a number of recent productions from the People's Republic of China (PRC), Taiwan, and Hong Kong. It builds on my other current work-in-progress, titled "Revolutionary Stagecraft: Technology and Politics in Modern Chinese Theatre," which takes a more historical approach to the unique connections among technological modernization, artistic innovation, and revolutionary politics found in Chinese theatre of the early-to-mid twentieth century.1

Beginning with a brief comment on the legend in premodern Chinese literary and performance traditions, this essay argues that over time, the theatre has played a key role in transforming the White Snake from a cautionary tale to one that celebrates human/nonhuman hybridity. In recent years, the addition of multimedia technologies such as large-scale screens, mechanical stages, and interactive projections further extend the role of the nonhuman in performance. I use analyses of three twenty-first-century productions to demonstrate how the addition of the technological nonhuman creates a more equal alignment between the human and nonhuman on both the narrative and performance levels and brings contemporary Chinese theatre into dialogue with global artistic trends. 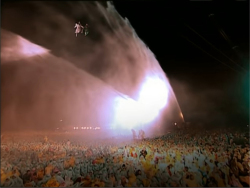 The large-scale outdoor Taiwanese opera (koa-á-hì) performance White Snake Spectacular uses cinema-sized screens to project live-feed video of onstage action and titillates audiences with its special effects. These include pyrotechnics, flying actors, and a cameo by the fire department, which is called in to spray audience members with jets of water during a celebrated scene involving a battle between the creatures of West Lake and the Buddhist monks of Golden Mountain Temple.

Impression West Lake is a site-specific performance that takes place on West Lake in Hangzhou, PRC. The son-et-lumière-style production is part of the "Impressions Series" (Yinxiang xilie) produced by Zhang Yimou, Wang Chaoge, and Fan Yue at popular tourist destinations throughout China. In 2016, the production was retooled, remounted, and rebranded as "Hangzhou, a Living Poem" (Zuiyi shi Hangzhou) in honor of the G20 Summit held that September in Hangzhou. New scenes added for this version include a holographic Swan Lake ballet excerpt and a climactic finale during which the illuminated letters "G20" rose from the lake to an orchestral rendition of Beethoven's Ninth.

As the narrator (He Ju) "paints," downstage left, brightly colored bamboo in classical style appear on screens and frame the other characters as they are illuminated upstage. The White Snake (She shi man, later retitled Baishe zhuan), directed and designed by Giacomo Ravicchio for the Shanghai Dramatic Arts Center. Screenshot. (Source: https://www.giacomoravicchio.com/white-snake-video.)

A video of this production can be seen at https://www.giacomoravicchio.com/white-snake-video.

Ravicchio's White Snake opened in the black-box "Drama Salon" space at the Shanghai Dramatic Arts Center in July 2009 and has toured internationally, as well as remounted in Shanghai in July 2014 and February 2016. The play combines spoken drama (huaju), a modern pop ballad, an acting style reminiscent of Beijing opera (jingju), and the use of interactive multimedia design.

Other Productions of the White Snake

Beyond the theatre, the White Snake has innumerable iterations in other mediums and literary genres. For a sampling of other theatrical, film, and animated adaptations of the tale, see, for example:

Through even this small sampling of recent adaptations of the White Snake we can see the role played by different mediums in inspiring endless iterations and new interpretations of an old tale. The presence of the human actors alongside nonhuman animal characters and technologies in contemporary live-performance versions of the story, however, ultimately makes these works especially complex and fruitful cases for exploring the relationship between the theatre and the nonhuman.

1. For my previous writing on the Legend of the White Snake in relation to Chinese literary history, see "Resurrecting a Postlapsarian Pagoda in a Postrevolutionary World," in A New Literary History of Modern China, ed. David Der-wei Wang (Cambridge, MA: Harvard University Press, 2017), 883–88.

Tarryn Li-Min Chun is an assistant professor in the Department of Film, Television, and Theatre at the University of Notre Dame, where she holds a concurrent appointment in East Asian Languages and Cultures. Her research explores the interrelation of technological modernization, artistic innovation, and revolutionary politics in modern and contemporary Chinese theatre. Her work has appeared in Modern Chinese Literature and Culture, TDR, Wenxue (Literature), Xiju yishu (Theatre arts), Asian Theatre Journal, and the edited volumes Staging China: New Theatres for the Twenty-First Century (2015) and A New Literary History of Modern China (2017).